Dani.ru
A small company with no more than 20 employees. Located in the city of Pushkino, Moscow region. Specializes in 2 areas: Leasing of construction formwork for monolithic construction and sale of household boilers through its own online store.
+
Acquaintance with the client's business, employees, and conducted advertising activities.

Analysis of the current situation and competitors

Part 1
At the time of the start of the project, the company did not have a full-time marketer. One fliner was used, which somehow led contextual advertising in Yandex Direct. Traffic led to the simplest landing page with a questionnaire in which the heading was changed depending on which keyword the transition to it took place. 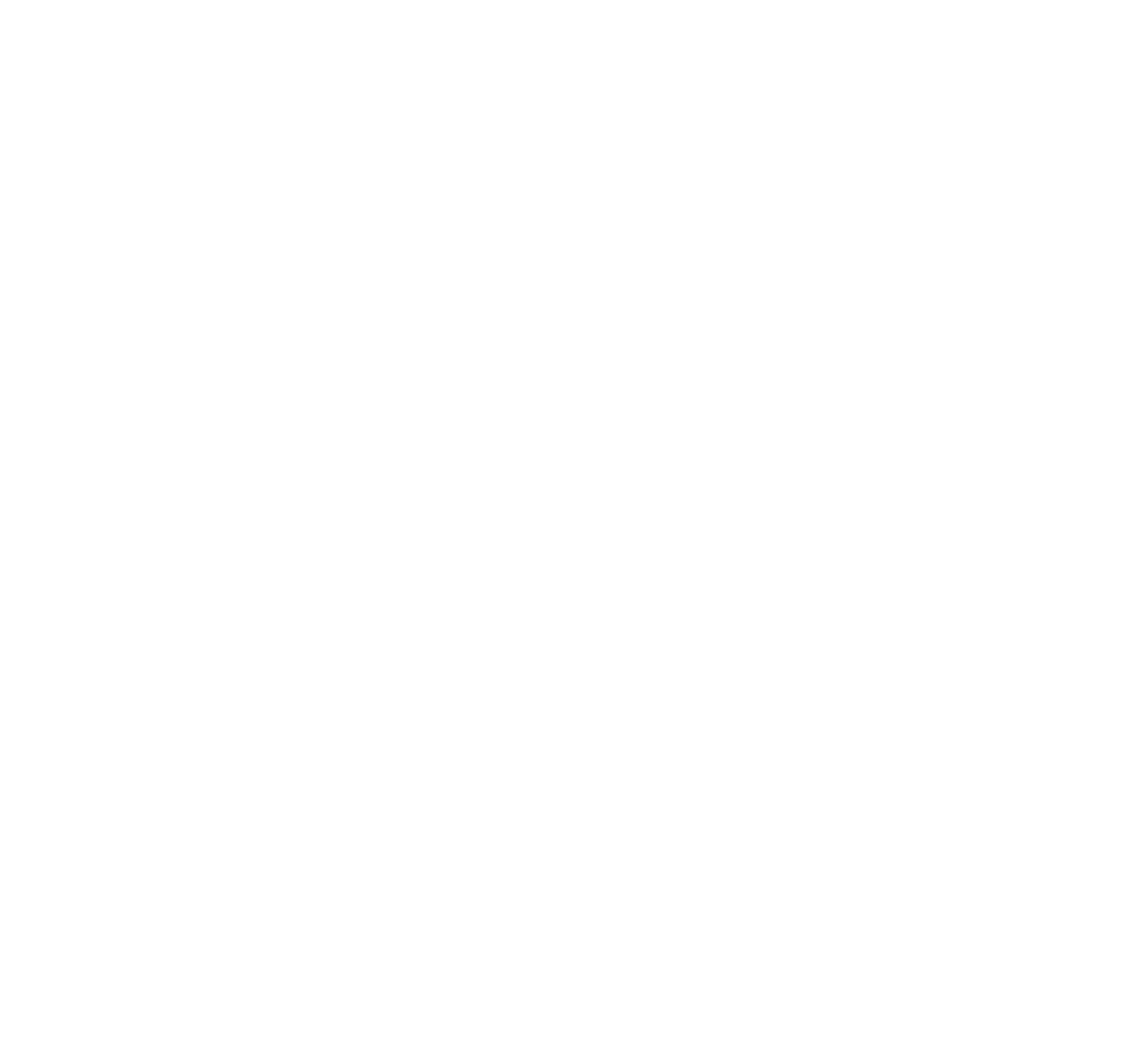 Part 1
Together with the owner, it was decided to implement the electronic marketing system in a greatly reduced form. Since the budget and term of work were extremely limited.

The basis of this work was the industry standard EMS - Electronic Marketing Systems developed by Completo. This is a step-by-step work plan for setting up all aspects of marketing in a company.
Competitive analysis
(Part one) 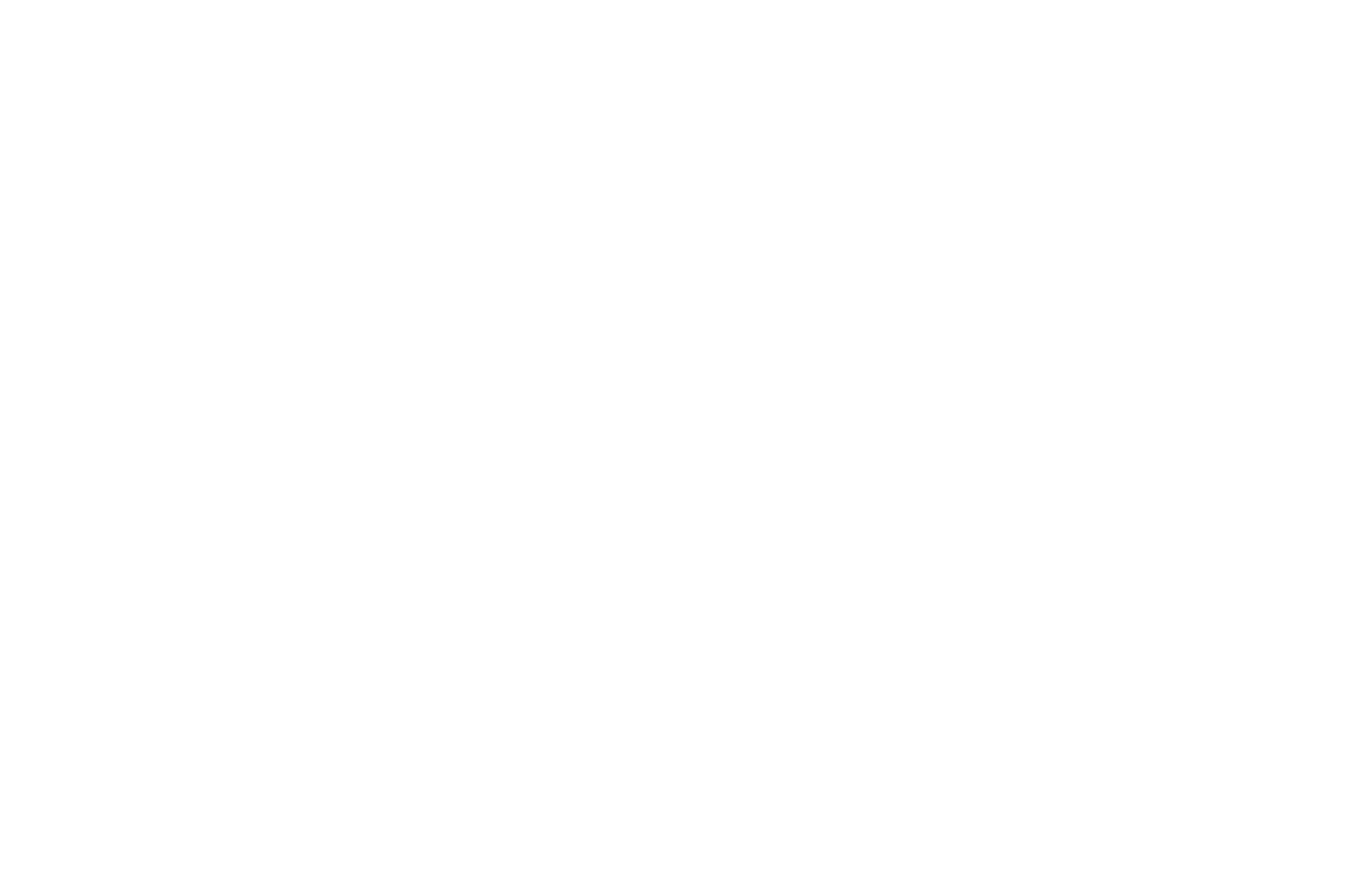 Competitor analysis
In the process of conducting a competitive analysis, the 15 largest companies and their websites were investigated. In particular, the structure of product offers, services, USP, positioning, technical parameters of sites, response speed, quality of work of sales managers, pricing policy, promotions and companies, features of SEO promotion and much more. 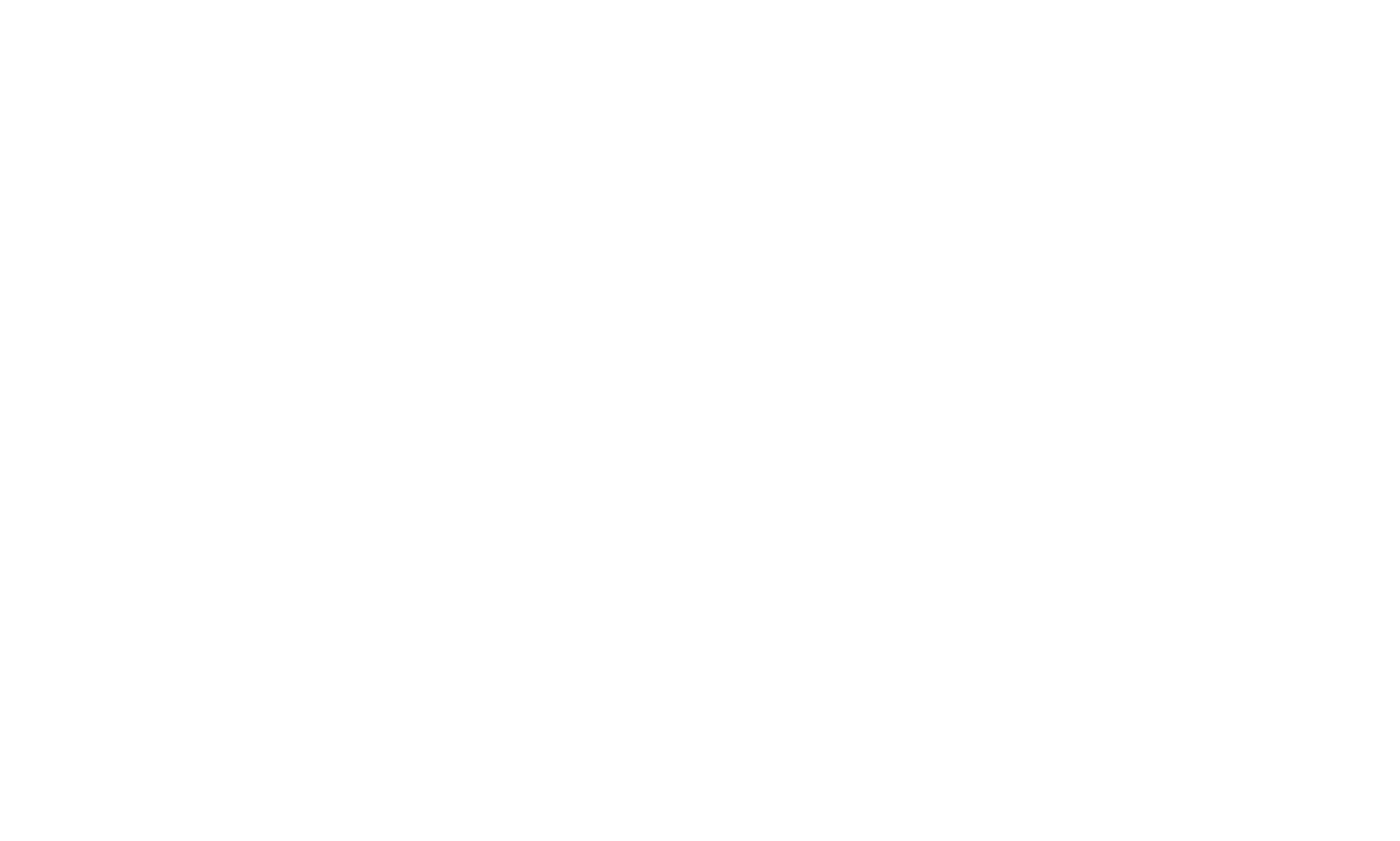 In which appeals were made to competitors with a request for a service.

Competitors ringing
A call was made to competitors and it was proposed to calculate the cost of renting the formwork according to the project plan. In the process of work, the cost of the service, the speed of response, the quality of calculation, promotions and discounts, and other parameters that affect the choice of the contractor were analyzed. The list of key parameters (3) influencing the choice that were found during customer farrowing was confirmed. 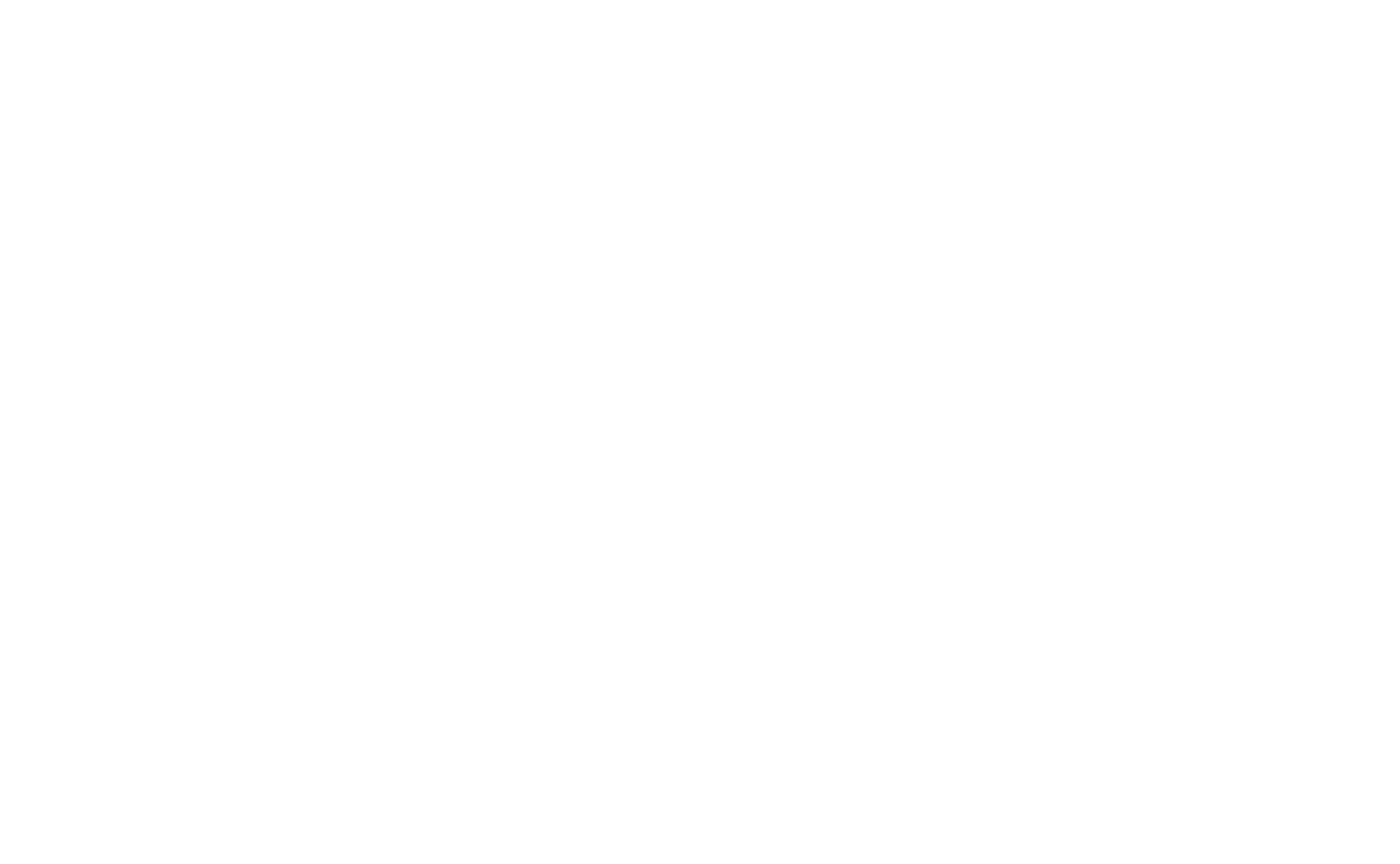 Customer survey
Another important operation was the survey of existing customers. From it it turned out that the most significant factor that influenced the client's decision to order formwork in the company was the correctly performed calculation of the layout of the formwork sheets at the facility and the speed of its receipt. The second most important was expected to be the range. The price was only in third place. In addition, almost all of the clients surveyed noted that they really enjoyed communicating with the manager, which prompted a decision in favor of the company. The data obtained from the survey significantly influenced the development of USP and the company's positioning. They were also used in contextual advertising and an offer on the site. 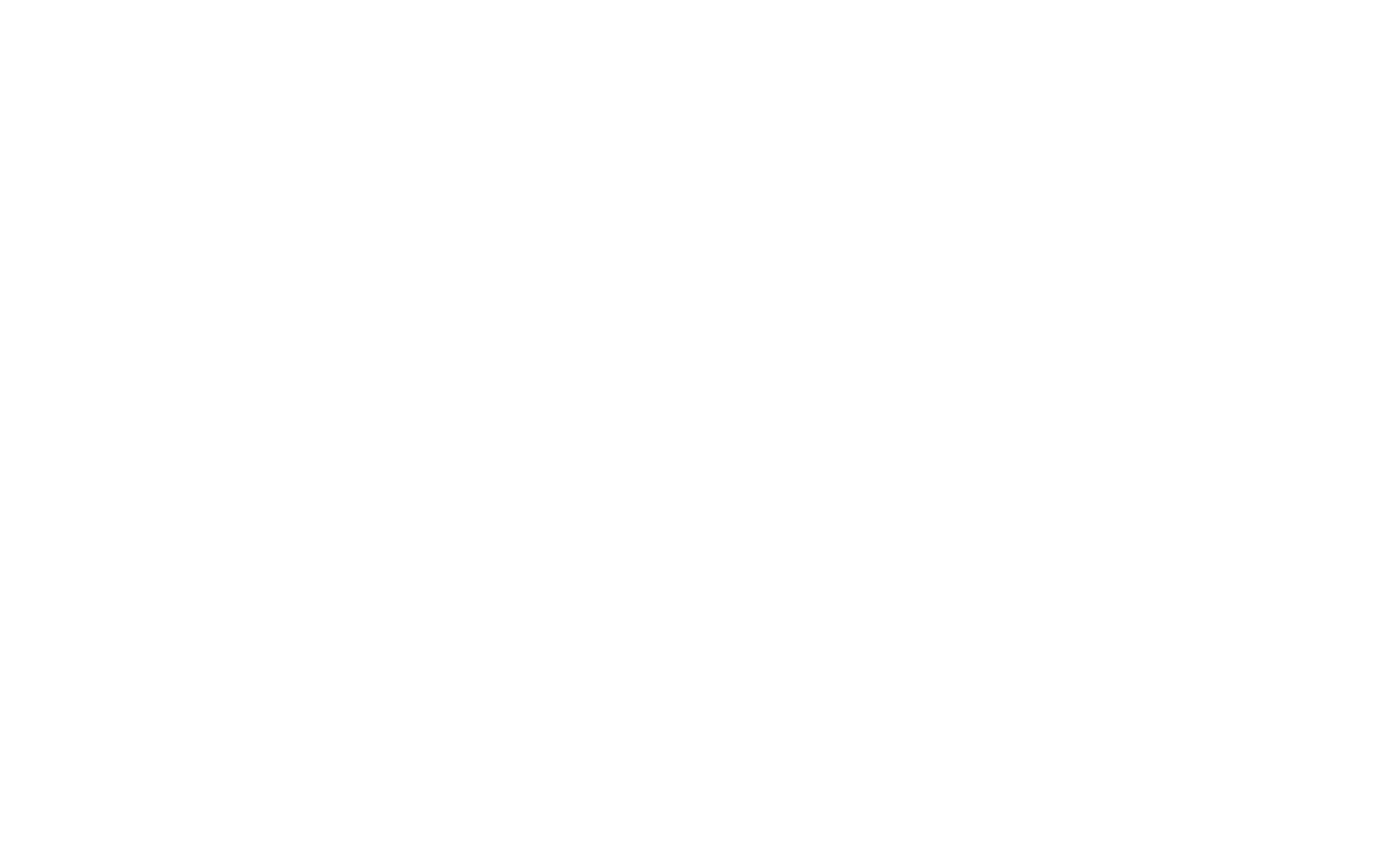 Listening to conversations of sales managers in CRM
Listening to incoming calls on Leeds brought some unpleasant discoveries.

1) Sales managers were not interested in the full management of customer cards.

2) The conversations were recorded only partially.

3) The data received in the CRM system about transactions, payments, calls did not correspond to reality.

To communicate with the client, managers preferred to call from mobile phones, linking clients to their personal numbers and simultaneously creating their own customer base.
All this made the analysis of end-to-end analytics a completely useless event.
Attempts to correct the situation with high-quality filling of customer / transaction cards and set up work exclusively through the company's phones ran into resistance from sales managers for obvious reasons. 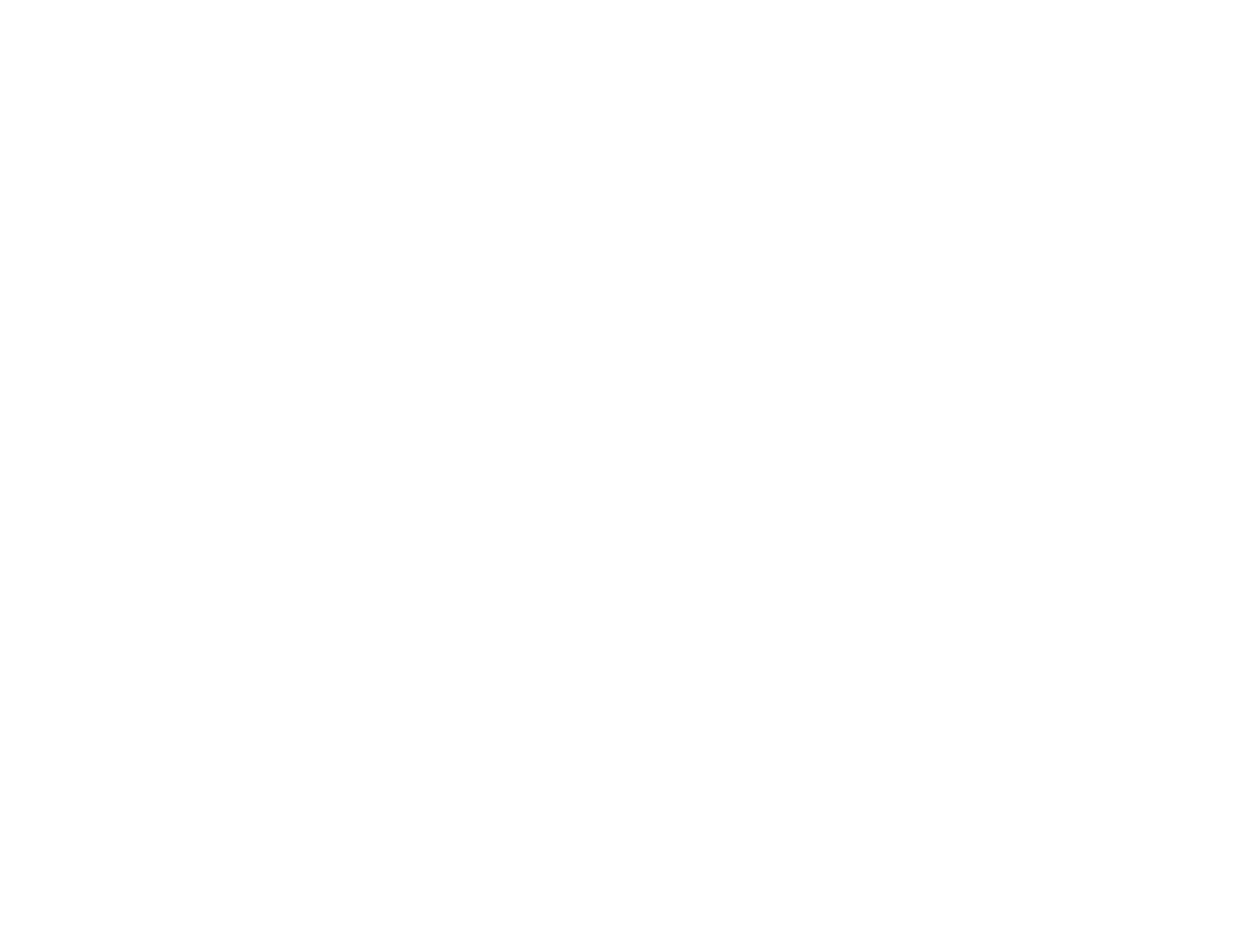 Contextual Audit
As part of the competitive analysis, competitors were screened.

The advertising companies of most sites in this niche were paired and analyzed. 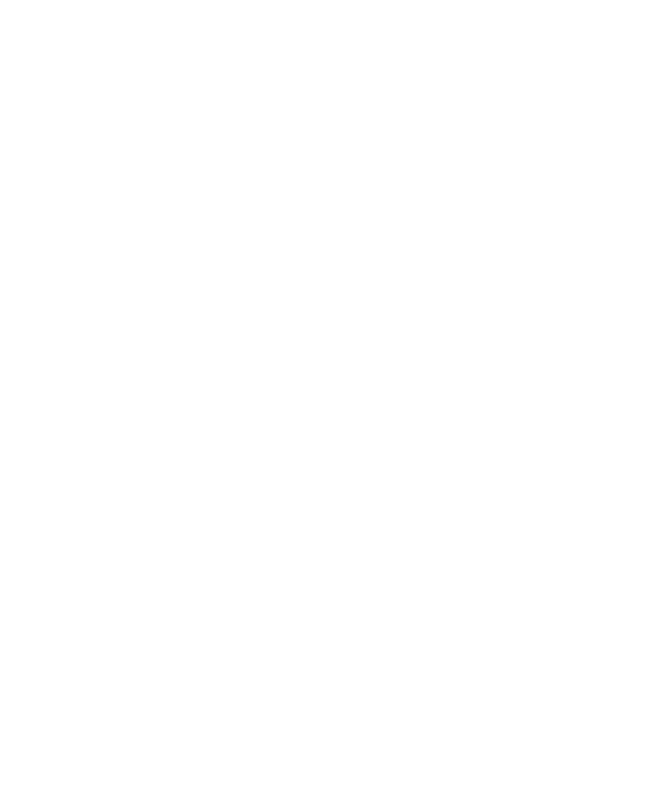 Customer survey
The audit of contextual advertising showed numerous shortcomings in the work of the contextologist. And the lack of competence of the owner in this area did not allow to fix it.

Mistakes were typical: for example, for the same ad was shown for many keywords. Ad texts did not have cl. words, extensions, and clarifications. Impressions were for information requests. Groups could contain several completely identical ads. Searching RK no one minus and did not follow the rates. No financial performance analysis has been conducted. 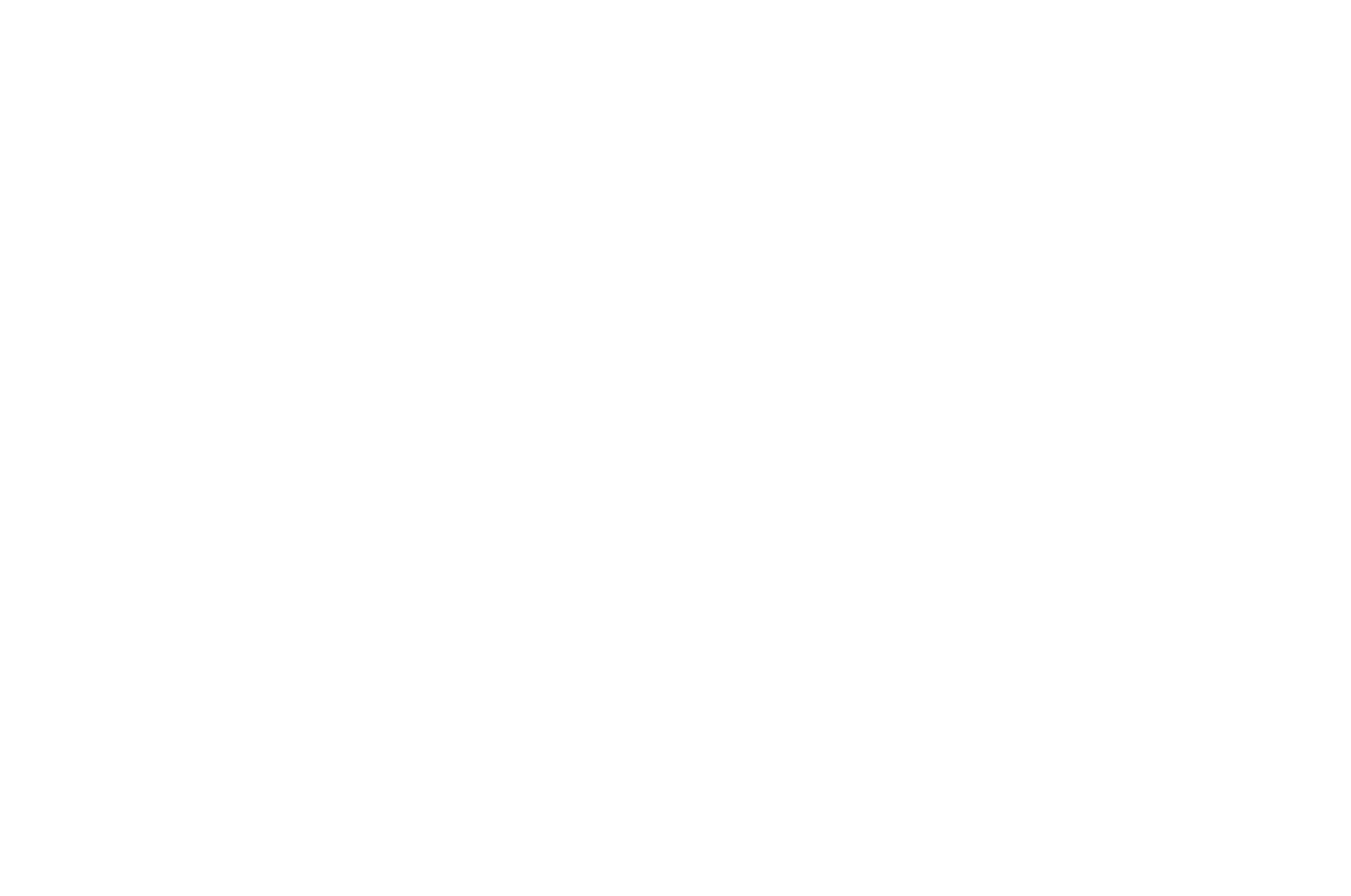 Selection and sorting of semantics
Understanding demand is one of the key parameters in a business that you need to build upon when drawing up a strategy. Therefore, based on the data of competitive analysis and query analysis, a semantic core of queries was compiled. It, in turn, was divided into sections, and later, during the preparation of advertising campaigns in Yandex.Direct and Google Ads, clustering was carried out. In addition, the assembled kernel has become the main for sections of the future site.
Promotion strategy
Based on the data obtained in the process of analyzing the company's activities, its strengths and weaknesses and capabilities (SWOT) and its competitors, together with the owner it was decided to introduce changes in the company's operations and change the company's positioning. 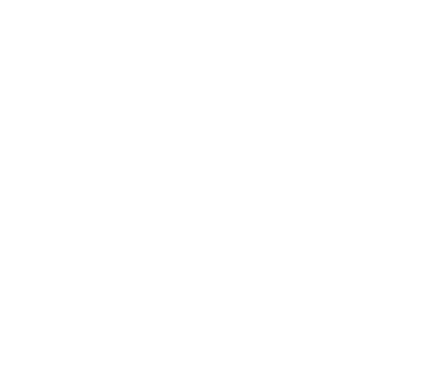 1
It was decided to provide the lowest prices in the market. The slogan appeared on the site - "If you send a competitor's estimate, we will make it even cheaper."

The work plan included a monthly analysis of competitor prices.
2
It was decided that the calculation of the project and the estimate will be provided to the potential client within 1 hour.

During the first call, the immediate delivery of formwork will be immediately offered. And immediately after the call, an SMS will be sent to the incoming number with the contacts of the responsible manager, price and delivery time. For customers who called from districts relatively distant from the company's warehouse in Ivanteevka and ready to order a substantial amount, managers began to offer delivery "at the cost of gasoline". This allowed us to compete with companies located in the immediate vicinity of the customer.
3
The actual USP, which the company began to broadcast in advertising materials and on the site, was:

Estimation and folding of formwork in 1 hour
Delivery of formwork during the day (on the day of order).

General positioning was defined as a company offering low prices in the market with excellent and fast service.

(Proximity to the consumer according to the Tracy-Wisrem concept)
4
It was decided to develop a new site in accordance with the approved strategy. And based on the collected information about the formed demand for the rental of formwork.
5
It was decided to develop an SEO channel, start promoting services on social networks, create a company blog, and start building a customer list / email for regular mailing.

The above are examples of ads for old and new ad campaigns. Prices have been added to all products for new listings.

The data obtained in the course of the survey of customers was used in additions to announcements. Instead of abstract ones: "Favorable conditions" and "Quick order" appeared: Calculation of the project in an hour, Delivery of formwork within 1 day, Installation supervision.

Also, a mobile version for full display on mobile devices and company contact information was added to all ads.
Bid Manager and 4th Special Placement Strategy
Instead of the previously used automatic strategies, Yandex.Direct introduced an external Bid Manager. This made it possible to maintain the 4th Special Placement Strategy and quickly manage rates.


The semantic core of queries has been significantly expanded. As a result, the company began to receive Lida on a much larger number of targeted requests. and CTR rose to 20%. 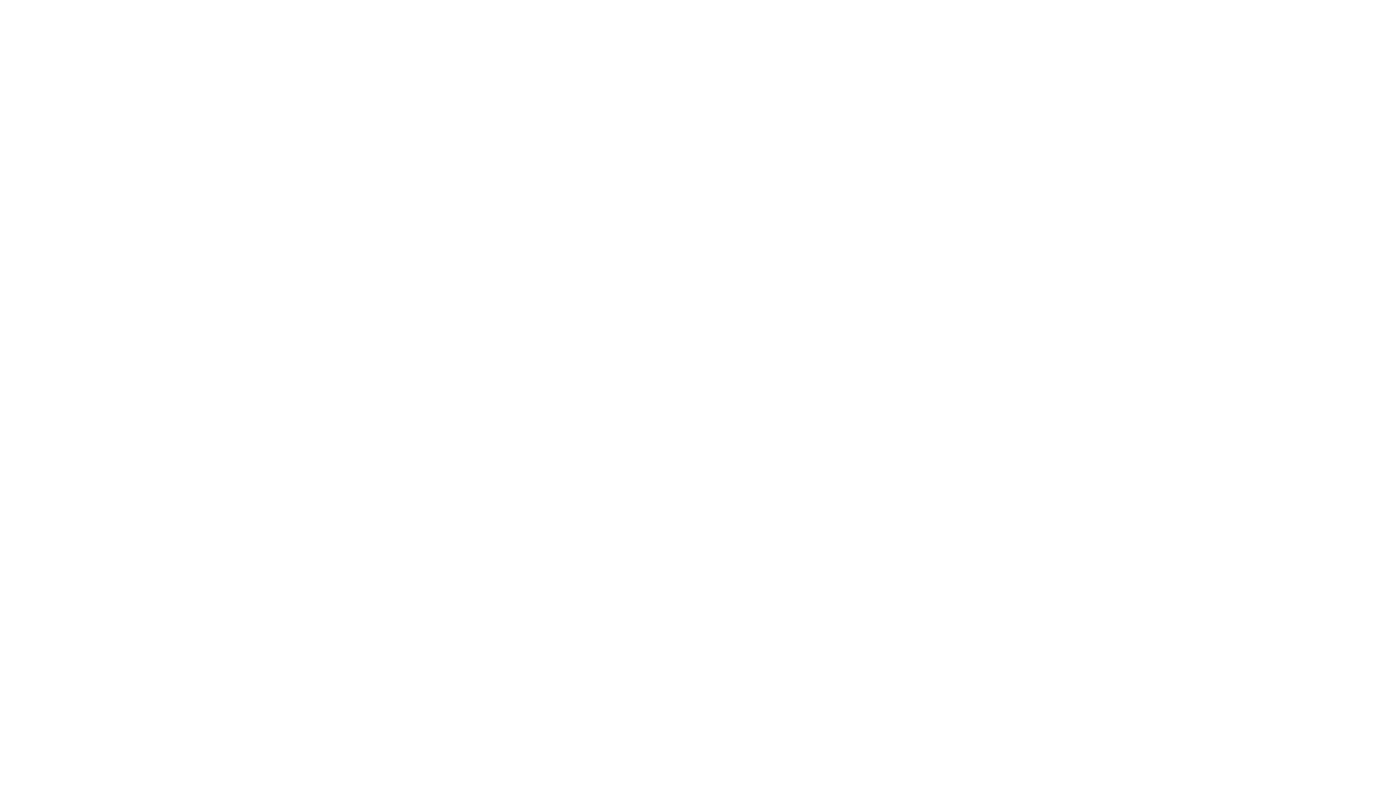 Prototyping the pages of a new site
Based on the collected data, the development of prototypes of the future site was started. Figma was chosen as a tool. The pages of categories were deeply worked out. In fact, a landing was collected for each of them.

3 segments of consumers (customers) that were identified from surveys of customers and "sales" of the company: private traders, foremen and developers were displayed on the main page. For each character, their own offers have been added.

When developing prototypes, SEO analysis of competitor sites was taken into account. In other words, if most of the sites in the top 10 on the promoted pages had a semblance of a product catalog with the possibility of ordering, then it appeared with us. In addition, even before working with prototypes, an analysis of LSI requests and outgoing links from competitors' websites was carried out and, based on the data received, the prototype received the required size of text, fragments and outgoing links.

Work with texts for a new site
In the process of creating texts for future pages of the site, the following services were used:

All three services significantly affect the quality of ranking of promoted pages in search engines Yandex and Google. 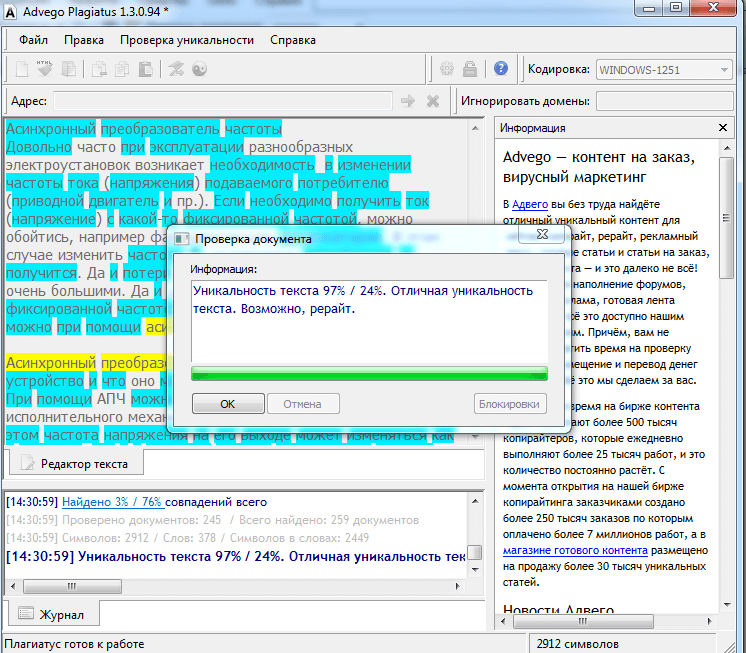 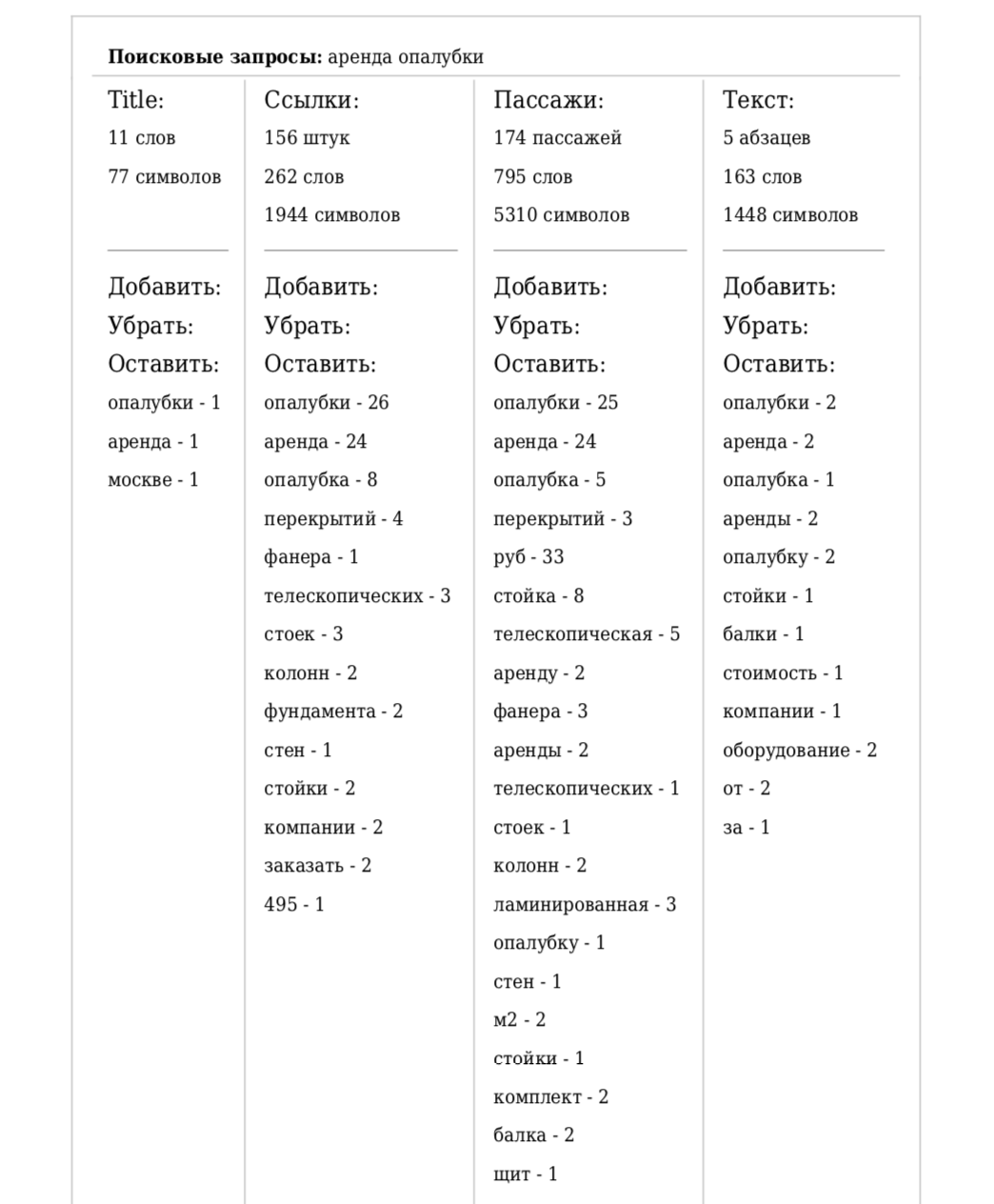 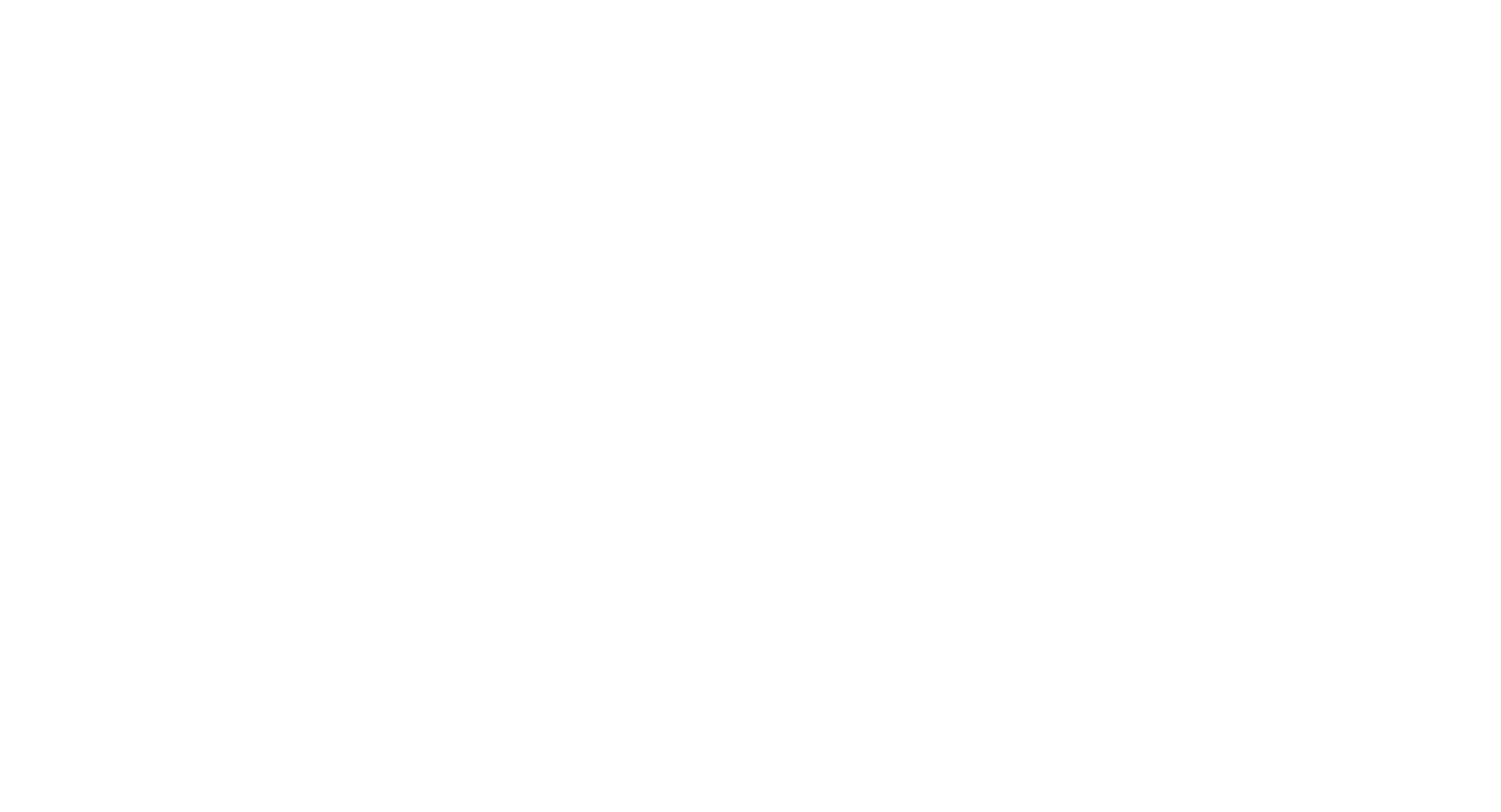 Design
Since the site was needed yesterday, and the budget was extremely limited, it was decided to conduct development on the designer Tilda. Actually, the value of this site is that the structure of the sections corresponds to the actual demand in the niche. Those category pages are advancing according to the most frequent requests and the site collects traffic in natural output for a much larger number of targeted requests.

The site contains USP, and the values that were found in the process of polling customers. Which positively affects the conversion (initial applications).

As for the design, it looks modern. And the development cost was extremely low and fast due to the fact that it was possible to combine the stage of design, layout and integration with CMS as is done in the standard case.
Main page
Service Page
Product Page
Article Page

Types of work performed on the project "Dani"

What is done
Targeting
Audit, creation and maintenance of contextual advertising campaigns and targeted campaigns on Facebook, Instagram. Creation and testing of various audiences.
Creative Development
Development of dynamic creatives in various formats for placement in the tape and story.
Technical Settings
Registration and configuration of various services: Yandex Metric, Google Analytics, Google Tag manager, telephony.
Competitive analysis
Analysis of the activities of the largest competitor companies. Parsing advertising campaigns. Analysis of the traffic structure.
Consumer survey and analysis
Identification of market segments of consumers. Survey and data collection to identify "Key Selection Factors."
Website development
Development of prototypes of site pages, seo optimization of texts, collection of the semantic core of queries for use in contextual advertising and structure design.
Want to increase sales in your business?
+
Leave a request for consultation and we will contact you
Request
+ 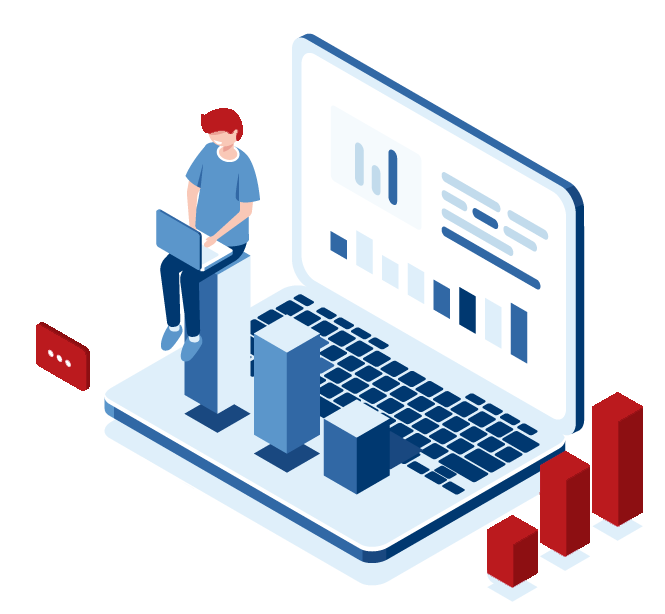 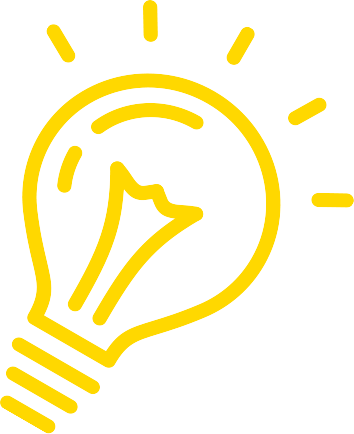 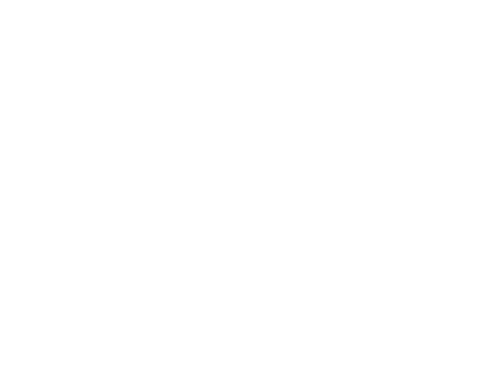 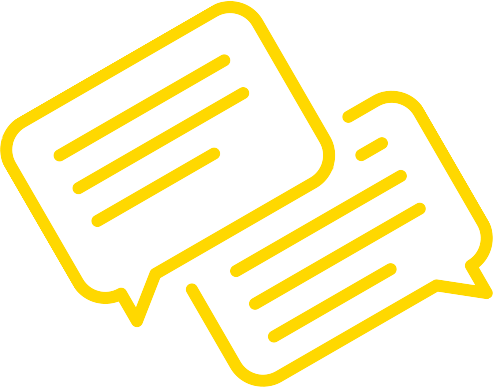